Joseph -- what a story! In the end, he had it all: incredible wealth, fame, and power. After a long period of suffering unjustly, God had vindicated him and raised him up to an exalted position. Even his entire family had joined him there in Egypt, to share the best of that place.

It would have been quite easy and natural for him and his extended family to feel very comfortable in that land, to not give the land from which they came another thought. Who needs Canaan when you have the best of Egypt at your command?

But at the very end of his life, Joseph gave critically important instructions, instructions that would chart the course of his family for hundreds, even thousands, of years. In a bold act of faith, Joseph did something even greater than anything he had done during his entire life.

Come to their aid? Whatever for? Everything was fine and happy now, wasn't it? But Joseph, having received the same prophetic promise as his father, grandfather, and great-grandfather, knew that his family would not stay in Egypt.

Joseph was insistent. You must carry my bones up. You must. Why was this so eminently important, and why do those instructions still have critical import today?

Hundreds of years later, when Joshua took the land promised by God, Joseph's instructions were carried out. His bones still lie in Shechem to this day.

And Joseph's bones, which the Israelites had brought up from Egypt, were buried at Shechem in the tract of land that Jacob bought for a hundred pieces of silver from the sons of Hamor, the father of Shechem. This became the inheritance of Joseph's descendants. (Joshua 24:32 NIV)

In the chapter of the Bible referred to by some as the "Faith Hall of Fame", Joseph is among those commended. Certainly he was a man of great character, who lived an extraordinarily faithful life during times of extraordinary duress. Many actions of integrity could be cited as examples of his solid faith in God. Joseph endured long periods of unjust suffering, but never questioned the benevolence of his God.

Yet the sole action of faith that is cited above all the others is extraordinary because it is so seemingly unexpected as his most laudable act.

By faith Joseph, when his end was near, spoke about the exodus of the Israelites from Egypt and gave instructions about his bones. (Hebrews 11:22 NIV)

Why, among all the other meritorious feats of Joseph's life, are the "instructions about his bones" singled out as his ideal act of faith? Why is this so important?

It is so important because it signifies Joseph believed God's promise about the land inheritance. His instructions, to carry his bones to what is today Israel, are distinguished by God as the greatest indication of Joseph's faith. And that tomb today, where those bones still rest as a silent reminder of God's abiding promise to Israel, is now being attacked by the haters of that promise. 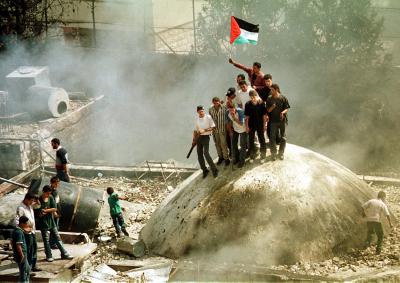 Not only do Joseph's bones today reside at Shechem, so also do over 150,000 Joseph-haters in nearby Nablus. Shechem, like other places in Israel of great historical and prophetic significance, is violently challenged by a large population of Allah-crazed bloodthirsty hostiles. Joseph's bones rest resolutely in the face of that hostility, as a clarion call of faith that still resounds over those hills.

Certain acts of faith are more than just symbolic. Their import resonates throughout the centuries as a firm authentication of the finality of God's firm pronouncements. 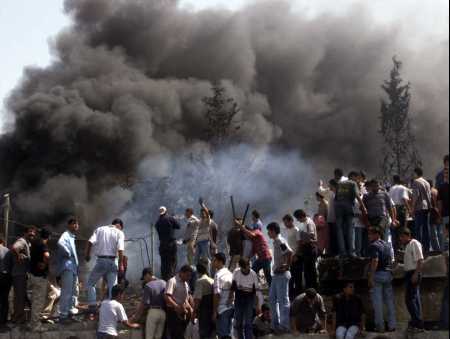 Joseph's bones, still in Shechem after so many centuries, stand as an irrefutable witness to God's irrevocable covenant with Abraham. When the Jews came into the land with Joshua, the bones were carried there. Now that the Jews have once again returned to the land, those bones are under assault. Why? Because they stand as a sure, staunch verification that the land still belongs to the descendants of Abraham.

The tract of land on which Joseph's tomb lies was legally purchased by Jacob. But that purchase, and those bones, are emblematic of something far greater. Understand this: the presence of Joseph's bones is nothing less than the very signature of God on the title deed of the entire land grant to Israel. 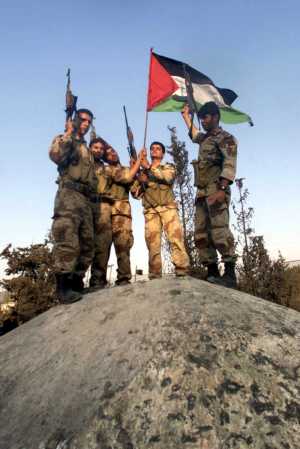 Nothing less than the integrity of God's very word is being assailed by those attacking Joseph's tomb. Through those attacks, the Palestinians attempt to efface God's signature on the title deed He bequeathed to the family of Joseph, through the oath He swore by His own name. How do you think God will respond to those attempts?

This last intifada, this final, futile uprising to toss the Jews out of the promised land, commenced in October 2000 in conjunction with the first assault on Joseph's tomb. Today, after three years, also during the same fall Jewish holiday period, the place of Joseph's bones has again been assaulted. Will God stand idly by?